I went to see yesterday The Shape of Water and I was highly disappointed. While the music, the cinematography and the performances are amazing, the love story is really not convincing and a bit creepy, and the unnecessary sex scenes (masturbation and coitus) and, specially, the monstruos violence killed all the poetry of the movie. In the same way that I don’t think a director needs to show the actors shitting, pissing or picking their noses I find graphic sex a very poor choice for a director to illustrate a point. But, more than that, I find violence onscreen really disturbing and I think that such a high degree of violence is a very poor tool for a director. An exception to that would probably be Tarantino, who uses violence in such a crude way that it ends out being funny (nevertheless, Tarantino’s violence is sometimes too much for me, even when he uses it for something great, like killing Nazis). I think that there are greater cinematic ways of showing violence than graphic torture, flying fingers, and litres of blood. If you don’t agree with me, go and see Doctor Zhivago: you will be amazed by the power of the scene where the Imperial Army is massacring the people next to the Winter Palace and all you can see is the horrifying face of Doctor Zhivago, who, from a safe window, watches men, women, and children being slaughtered by the Imperial Army. Now, that’s art. The rest is only good special effects and a big lack of imagination. The same goes for sex. There are many ways of showing the act of love (also the act of fucking –that’s it: making love without love) with sensuality, strength, and poetry, but Guillermo del Toro chose here graphic sex. Why? I guess it sells better.

Frankly, I don’t get the hype around this film. 13 Academy Award nominations? Come on! Guillermo del Toro looks like a really nice guy, and I actually hate to write negative reviews. If I spend a bit of time in writing this negative review it’s because, as with La La Land (an annoying and cheesy torture filled with cliches), I’m amazed at how bad or not so good Hollywood movies can get such a hype, while other movies, like Woody Allen’s masterpieces, get shut out and don’t get any important nominations (yes, I am a huge fan of Woody: I love his art, his philosophy and his genius, and I’m very angry at this wave of hypocrisy, opportunism and lies around him that mixes false accusations from two crazy and resentful women with the most beautiful art).

The characters of The Shape of Water are all either black or white, there are no greys here: the bad ones are really bad and the good ones are really good. Well, life isn’t neither black nor white. It’s full of greys. While the performances of the movie are all amazing (Sally Hawkins is great, Octavia Spencer is amazing as always, Richard Jenkins is really good too and Michael Shannon is stunning: he really steals the movie and, surprisingly, didn’t get any Golden Globe or Academy Award nomination), the souls of the characters are painted only in one color, and that’s very Hollywood-ish and commercial.

I understand why this movie can arrive to people, especially people who feel very lonely. I feel a great deal of empathy for all the people who feel alone in the world and seek love and company wherever they can, but I think that the black and white characters and the huge degree of violence kill the depth of this movie. Maybe the majority of the people of  today are so used to see violence (on TV and on the internet) that they don’t even notice it any more. I am very sensible to violence and it disturbs me a lot when I see it (here at home we don’t have a TV for many many years, so I really don’t know what’s going on with TV violence these days –we only choose what we want to watch and watch it with our cinema projector). I understand that there are movies where violence is necessary (for instance, if you watch a movie about the Holocaust it may contain some graphic violence) but what really bothers me, artistically speaking, is superfluos violence: violence for selling, for entertaining a bit more and keep the audience amused. That  kind of violence is repulsive.

I don’t like to put a qualification for a movie. I always found it pretentious to qualify the huge work of a director with a number (I’m aware of the fact that to create art is difficult and to criticize is easy). But this time, since there is such a hype around this film, I feel obliged to qualify this movie. So, 1 point for the music (Alexandre Desplat), 1 point for the cinematography (Dan Laustsen), 1 point for Michael Shannon, 1 point for Sally Hawkins, 1 point for the amazing Octavia Spencer, and 1 point for Richard Jenkins. 6/10

If you want to listen to good music, be amazed by a beautiful cinematography, see Sally Hawkins’s tits, vagina and ass, enjoy your popcorn while a fish-creature is being tortured in a brutal way, blood is running, and a cats loses her heads, go and see The Shape of Water. 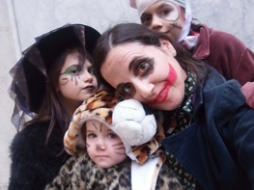